It’s no secret that I’m a big comic book fan. I’m also a fan of movies. So you’d think that if you combine those two things, it would automatically result in me shelling out the money for a movie ticket to any and all “based on a comic book” movie released. Well, no. I’m not going to see your movie just because you licensed a character from Marvel comics. You have to give me something worth seeing.

Which is why I’m torn about Ghost Rider: Spirit of Vengeance.

END_OF_DOCUMENT_TOKEN_TO_BE_REPLACED

Comic of The Week: Wolverine and The X-Men #3

When the first issue of Wolverine and The X-Men was released, I wasn’t going to pick it up. It’s been a long time since the regular X-Men titles grabbed my attention. But when I saw the cover to Wolverine and The X-Men #1, I knew I had to give it a shot. This is the X-Men comic that takes my three favourite X titles of all time – Morrison’s New X-Men, Milligan/Allred’s X-Force, and Lobdell/Bachalo’s Generation X – mooshes them together and then let’s things get freaky from there. It shouldn’t work. But it does. And so far it’s my favourite X title in a very long time.

END_OF_DOCUMENT_TOKEN_TO_BE_REPLACED

If you were checking out the racks of magazines and comic books in December 1940, you might have caught a glimpse of a brand new comic book called Captain America Comics. On the cover was an image of a man dressed in an American flag themed costume punching Hitler in the face. Which was pretty forward thinking of the artist, considering the attack on Pearl Harbor and America’s entry into World War II was still a full year away. Here was the very image of American freedom and pride in action. Since then, Captain America has been front and center amongst the pantheon of Marvel superheroes. So it was inevitable that Captain America would get his turn to shine as part of the Marvel Comics onslaught of the silver screen.

So here’s Captain America: The First Avenger. A lot could go wrong here. This is a superhero adventure movie set during WWII that also has to act as the next chapter in the ongoing Marvel movie continuity already set up by Thor, Iron Man, and The Incredible Hulk. A lot could have gone wrong. But it doesn’t. What we have here is a film that manages to be a tight, heart-felt adventure that is one of the most consistently good superhero movies ever made.

END_OF_DOCUMENT_TOKEN_TO_BE_REPLACED 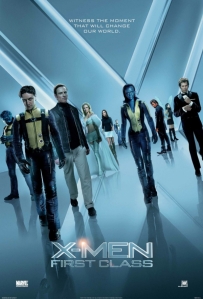 There’s something about the 1960s which just strikes me as being sexy and cool. I remember as a kid being exposed to a lot of Get Smart, Rat Pack movies, the old school Batman TV show and of course Sean Connery as James Bond. The music, clothes, style and attitude will always be associated with a certain kind of cool. The Beatles were rocking the chart, London was the fashion capital of the world and JFK was in the White House. And in America, a small comic book company called Marvel Comics was beginning to make it’s mark. They already had hits with characters such as the Fantastic Four, Iron Man, Thor and Spider-Man. And then came the X-Men.

The X-Men was a book truly ahead of it’s time. The X-Men was about a group of outcasts who were hated and ostracized just because they were born different. They stood up to protect a world that hated and feared them. This is what made them special. This is what made them unique. And the new movie X-Men: First Class takes us back to the beginning of the X-Men. Super powered mutant vs super powered mutant with a 1960s backdrop.

And the results are groovy.