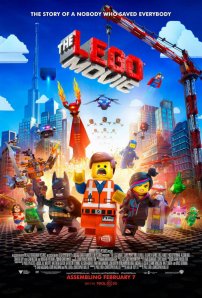 Everything is awesome. It’s not just the name of the catchy and quirky pop song that plays incessantly during The Lego Movie. It’s an accurate description of the film itself. Everything about this movie is awesome. After watching The Lego Movie I want to pour a huge box full of Lego pieces on the floor and spend hours building stuff.  True,  I want to do that most days. But after watching this movie, I really really want to dive into a big pile of Lego, Scrooge McDuck style.

The Lego Movie is infectiously crazy, cool and creative. It’s everything I want in a movie. And I don’t really care that it’s a 2 hour toy commercial. Give me this over a Michael Bay Transformers movie any day.

In a world made out of Lego, a lonely Lego minifigure named Emmett goes about his day – going to work at a construction site and living his life according to the instruction manual. But a chance encounter with a mysterious relic plunges him into plot full of chosen ones, prophecies and doomsday scenarios. And Batman. Because everything’s better with Batman. It’s up to Emmett to fulfill his destiny as The Special, take on the evil Lord Business and save the world. Maybe. 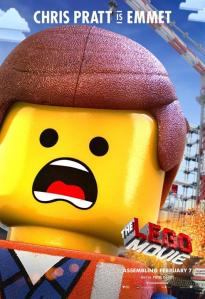 The Lego Movie sets itself up as a Matrix style Chosen One story – an ordinary individual discovers that they are specialler than everyone else and must use their previously undiscovered amazing abilities to save the day. It’s a plot that we see used time and time again, from Harry Potter to Kung Fu Panda. Now while it would have been perfectly okay for The Lego Movie to follow the same route, instead the whole trope is subverted and thrown out the window. The Lego Movie ends up being about so much more, dealing with creativity, team-work and surprisingly – father-son relationships. Just as the backgrounds are packed full of detail, so too the story here is worth chewing over and dissecting. Or you can watch it for the cool Lego explosions. Either way, you’re winning.

There’s obvious love and care poured into every aspect of this film. It could have just been one big commercial – apart from the multiple The Lego Movie Lego sets you can buy in the shops, there’s at least one licensed character who makes an appearance who won’t even hit the shelves until later this year (hello Milhouse!). But nothing about this movie is phoned in. Every line of dialogue, background character, plot development and scene of Batman being Batman is there because someone thought it would be cool. And they were right. Where else can you see Gandalf making fun of Dumbledore? Or the Renaissance artist Michaelangelo teaming up with the Ninja Turtle Michaelangelo?  Or Batman partying with Han Solo on the Millennium Falcon? Or Superman acting like a hero? (Sorry, still bitter about the Man of Steel)

One of the things I love about The Lego Movie is that it doesn’t push a one-size-fits-all philosophy for life. Stand out and be creative or fit in and follow the instructions – it doesn’t matter as long as you’re having fun. And if you manage to save the day while doing it, even better. Just get out there and do something.

I’ve been struck by something lately as I read my Bible – God has given us these brilliant minds and encourages us to use them. When we read the Gospels, we are constantly pushed to evaluate the evidence, to think for ourselves.  We have been given gifts by God to use to build up the church, so use them! Take what God has given you and build his kingdom.  If you’re a creative person, make movies, paintings, dramas – and use them for the kingdom. Or if you’re a follow the instructions kind of person, learn 2 Ways To Live and teach people about Jesus.  The Lego Movie says take what you’ve got and have fun with it.  For Christians, take what God has given you and enjoy yourself as you serve him.

I know it’s still early in the year but The Lego Movie is already a contender for my movie of the year. I’m putting every other movie released in 2014 on notice: bring your A-game if you want any chance of taking that top slot. Because The Lego Movie is gonna hold onto that title with a firm interlocking grip so tight you need a knife to separate the pieces. Yes, it is that awesome and you should rush out to see it.