Comic of the Week – The Unwritten: Apocalypse #2 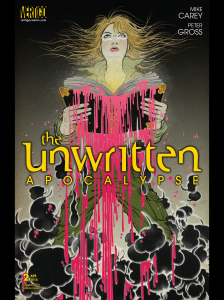 Vertigo put out the kind of comics I love to read. Ever since I started seriously reading comics, I’ve always hunted down that Vertigo label. Even when I don’t enjoy the comic, I know it will be at least different to everything else on the stands. And maybe even expand my mind a little bit.

When The Unwritten began a few years ago, you just knew this was going to be something special. The story started out as a conspiracy tale starring Tom Taylor, a man who had a series of Harry Potter like stories based off him. As the series has progressed, it’s become clearer that this is a story about stories – and the distinction between story and reality has got blurrier with every issue.

The Unwritten: Apocalypse is the second half of the Unwritten story. At the end of the last volume, bad things happened. And now what we see is a post-apocalypse world where the barrier between story and reality no longer exists. Walking through London, geography and time shift and change randomly. You never know what you’re going to stumble into. Or even what rules of reality will be followed. The big question in all of this: How will Tom fix everything?

I’m loving this series and really think you should give it a shot. Probably best to start with the first book – Unwritten Vol. 1: Tommy Taylor and the Bogus Identity.

Other books I read this week: