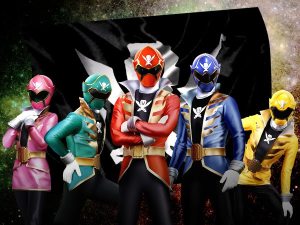 I’m not 100% sure what led me down this path. I think the first thing that started the niggling in the back of my brain was my favourite podcast – Major Spoilers. One of the hosts, Matthew, had mentioned a few times that he was watching Super Sentai, the Japanese show that provided the action scenes for Power Rangers. And if Major Spoilers talks about it, I usually file it in that part of my brain marked “worth checking out”. A bit later, a number of websites I check out were getting excited over something called the 199 Hero Great Battle, that had every Super Sentai team member simultaneously involved in a giant battle sequence. Hundreds of brightly coloured spandex suits involved in an epic martial arts fight sequence. I had to find out more. A quick Google search led me to English subtitled episodes of a show called Kaizoku Sentai Gokaiger. And it was glorious.

The Gokaigers are five (later 6) young space pirates searching for the greatest treasure in the universe. A treasure that is hidden on Earth. They are pursued by the evil Zangyack Empire who have put out bounties on pirates. The Gokaigers have in their possession a number of “keys”‘ which when used, transform these space pirates into any of the previous 34 teams to call themselves Super Sentai. It’s these keys that make Gokaiger stand out. Because not only is this the epic adventure of a crew of space pirates, it’s an anniversary show, celebrating the 35 year of the Super Sentai series.

There are many things I needed to adjust to when I sat down to watch Gokaiger. One of those things is that Japan does TV differently to the Westernised shows I’m used to. Super Sentai has been in continuous production since 1975. The only show I can think of that gets close to that is Doctor Who (began in 1963) and that took a 16 year break. Not only that, but each season of Super Sentai goes for roughly 50 episodes. All in a 12 month span. That’s got to be a punishing production schedule. But not only do they do it, they also manage to release several related movies each year as well. Pretty impressive.

One of the secrets of Super Sentai’s longevity is their openness to change. Each year has a new theme, a new set of characters, a new story. The only connection from year to year is that a team in matching colour coded spandex costumes will fight monsters in rubber suits with the help of a giant robot made up of other giant robots (I didn’t realise how fun it would be to write that sentence). From that base you can have stories about ninjas, samurais, angels, time travelers, dinosaurs, or even space pirates. Kaizoku Sentai Gokaiger celebrates what has come before, using the costumes and powers of previous teams as well as featuring guest appearances from older Sentai characters.

All of this can be a bit overwhelming. Decades of previous stories, hundreds of characters, foreign cultural references, and a genre that’s different to anything we have on TV here. And of course it’s all in Japanese (a language I can’t speak or read). Yet once I pushed past all of that (with a lot of help from Google and Wikipedia) I found a show I could fall in love with. It’s not much different to when you open up the Bible for the first time. You’re not sure where to start, there’s a whole bunch of characters you don’t know (and you’re not sure which ones are important), it’s full of cultural references that would make more sense if you lived in the middle east 2000 years ago, and it’s written in styles that aren’t used as much today. At least it’s been translated into English for us! Considering my ability to read Greek (sort of okay) and Hebrew (non-existent), having the Bible in English is brilliant.

But once you immerse yourself in the Bible, once you learn what it is saying and how it is saying it, you can experience something wonderful – God speaking to you. The Bible is the Word of God, written down and passed on to us. It would be tragic to miss out on this experience just because of some cultural differences.

Now I’m not saying Gokaiger is on the same level as the Bible. Not even close. But it is one of my favourite shows of all time. It’s worth spending the time to break through the cultural blockades and experiencing this show.