Teenager gets bitten by a spider. Gets super powers. Learns a lesson in responsibility. It’s a story we’ve seen before. After all, it’s only been ten years since Tobey Maguire first slipped on the spandex and went swinging through the streets of New York. I love the Sam Raimi directed Spider-Man movies So did we really need a new Spider-Man origin movie? No, we don’t. But if Amazing Spider-Man is the movie we get, then you won’t get any complaints from me. Because this is a great movie. I’ll even go as far to say I prefer it to the original trilogy. And that’s a big call.

Peter Parker (Andrew Garfield) is an ordinary teenager who gains super powers through a spider related accident. He learns a lesson in responsibility when his uncle is killed by a criminal that Peter could have stopped earlier. Peter dons the Spider-Man suit, fights a super powered bad guy (in this movie it’s the giant reptile The Lizard) and pursues the girl (Gwen Stacey, played by Emma Stone). Pretty similar to the original movie. But what makes this movie stand out is the differences.

Amazing Spider-Man is a much more grounded, realistic movie. Which is weird to say about a movie about a guy in a Spider suit fighting a giant lizard. Where Raimi went for big, broad moments, director Marc Webb (seriously, that’s his name, no pun intended) pushes the focus on the characters. This is the most real Peter Parker has ever felt. Here he’s not a generic nerd character who becomes a selfless hero. Sure, he’s still a smart guy. But he’s far more well-rounded. He’s an outsider, but not a complete loner. He’s an avid photographer but also a keen skateboarder. He loves his aunt and uncle he lives with but fights over independence. He does what is right, but does so with youthful arrogance. He’s not perfect. And I love that about him. He reminds me of many teenage guys I know.

This realism extends to the whole feel of the film. Especially in the treatment of violence. Getting into a fight has consequences. Some one punches Peter in the face, he gets a black eye. The Lizard claws at his chest? Bloody wounds under his shirt. The violent side of Peter’s crime fighting is spotlighted. And then we have the way Peter interacts with the other characters, the costuming, the mystery behind the death of Peter’s parents, the loose ends left for the sequel (this has to be a trilogy, right?). All of this builds to give this movie a real world feel that I fell in love with.

At its core, Amazing Spider-Man is a movie about a young man growing up and learning the lesson of responsibility. While he still has some ways to go at the end of this movie, he’s definitely on the right track. It’s this sense of responsibility that spurs Spider-Man onto fighting crime, defending the city, protecting his friends and family. He is a good guy that does good things. But what determines what is good? There’s a scene where Peter is talking with Gwen’s dad, police officer Captain Stacey (Dennis Leary), over dinner. Peter argues that Spider-Man is doing good. Captain Stacey argues that Spider-Man is dangerous and is actually hindering police operations. Who is right? The thing is, there needs to be a standard for what is considered good. But seeing as no one seems to be able to agree on what counts as good, where does that leave us? 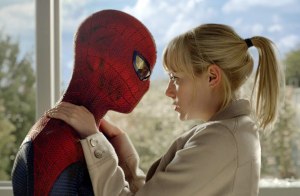 It leaves us with God. Psalm 119: 137-138 says “Righteous are you, O Lord, and your laws are right. The statutes you have laid down are righteous; they are fully trustworthy.” God is the creator of this world. He knows how it works and how it should operate. And because he is without sin, he can look at this world and say what is wrong and what is right. Spider-Man is a good guy. And he tries to do good things. But unless he is turning to God and his Word for guidance, he’s ultimately going to fall short. We could follow Spider-Man’s example and become a “good guy” but we’d be directionless. Looking to God for our cue on how to live would be a lot wiser.

Because of the cuts and bruises that Peter receives, this movie is not really aimed at younger kids. But for the slightly older audience, this is a great movie with relatable characters, spectacular special effects, and more than a few tear-jerking moments. I loved Amazing Spider-Man. So much so, that at this point in time I’m looking forward to the second installment more than any other upcoming super-hero movie. And considering how big a super-hero fan I am, that’s saying something.