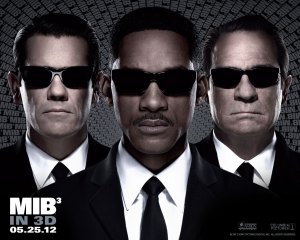 Flashback to 1997. For some of you this will be easier than for others. There was this movie called Men In Black. And it was huge. Will Smith had a hit single with the Men in Black rap song. Every optometrist was advertising Men In Black Ray-Bans. A cartoon series based on the movie. At least one out of three blokes rocking up to a fancy dress party that year wore a black suit and a pair of sunglasses (and yes, I was one of them). The original Men In Black really captured the public attention. And then 2002’s Men In Black II was released.

Cue the sound of chirping crickets.

Yeah, Men In Black II wasn’t exactly the best movie. So it’s not a surprise that it took another ten years to try again. To see if the Men in Black magic could be bottled once more and splattered across the cinema screen. I’m going to say it. I know it will be a controversial statement but I’ll say it anyway. I think Men In Black 3 is not only a great movie, but even better than the first Men in Black film.

The Men in Black are a secret organisation that monitors and polices alien activities on earth. They make sure that all the crazy alien hijinks are kept out of the news and that no one suspects what is really going on. And they do it while looking sharp and packing some seriously cool alien technology. MIB3 opens with Agents J and K (Will Smith and Tommy Lee Jones) going about their usual business. Well, usual for them. Exposing the chef of a Chinese restaurant as an extra-terrestrial with antenna is not something I do on a day to day basis. When an old bad guy from K’s past breaks out of prison and manages to travel back to 1969 and kill K, therefore removing him from the present day, it’s up to J to make the jump himself and save the day.

MIB3 is the perfect example of a sci-fi comedy. There are lots of laughs to be had and the plot doesn’t take itself too seriously. But that doesn’t mean it treats everything like a joke. There are great action sequences, real consequences that need to be dealt with, and at the heart of it all – real emotion. I don’t know if I’m getting soft in my old age but the final scenes got me a little bit teary. If I had teared up, the movie would have earned it. MIB3, just like the original, is not a plot driven movie. It’s a character driven movie. The relationship between J and K, whether it’s 2012 K played by Tommy Lee Jones or 1969 K played by Josh Brolin, is the key to the MIB franchise. MIB3 could have put the focus on special effects or crazy costume design. Instead, it puts a lot of trust in the main cast. And that trust pays off.

One thing I would have liked the movie to expand on was the theme of racism. Some mention was made of J, an African-American man, travelling back to the 60s where people of colour were treated differently. Though after one humour scene it’s never mentioned again. Or the suggestion that in 1969 aliens are not treated on the same level as humans. I would love to see this exploration of race and racism picked up and explored if there’s a MIB4. And I really hope there is one.

One of the aliens that J meets in 1969 is a guy called Griffin. He’s a guy with a special gift – he perceives time different to the rest of us. We see time as a straight line – past, present, future all happen in order. Not so much for Griffin. What he sees is all the possible futures that could happen and the events that lead to those futures. He’s constantly concerned if he’s in the time-line where he eats the sandwich or the one where he leaves the party early. Because one of those futures bad things happen and in the other good things happen. He is plagued with uncertainty and doubt because of this. This is an idea often played with in science fiction, particularly when time travel is involved. The concept is called quantum uncertainty. For every decision that is made, a new universe is created. There’s one universe where you waited for the little green man before crossing the road and another where you crossed while the little red man frowned at you with a mix of disappointment and sadness. 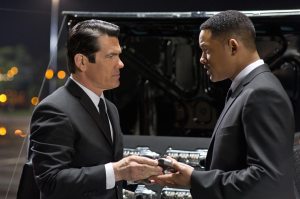 As a Christian, this is a concept I struggle to deal with. Because I’m not sure how this theory works with the truth that God is always in control. God created this world. Before time even began he knew who would be in it. He knew if they would be saved or not. He knew that Jesus would have to come into this world to save it. He even knew when Jesus would return and bring in the new creation. God has everything planned. There is not a single event in this world that God hasn’t anticipated. The fact that a world could exist where God wasn’t in control, where Jesus failed to deal with sin, I find this unfathomable. It just doesn’t work with a Christian understanding of the world. So unlike Griffin, we don’t have to be afraid of which timeline we’re living in. Because we’ll always be living in the timeline where Jesus is victorious over death and will return in glory. Ephesians 1:4-6 “For he chose us in him before the creation of the world to be holy and blameless in his sight. In love he predestined us to be adopted as his sons through Jesus Christ, in accordance with his pleasure and will— to the praise of his glorious grace, which he has freely given us in the One he loves.”

I had a great time watching Men In Black 3. And I’m going to make another controversial call – this is a movie worth seeing in 3D. It’s not often I say that, but this is a movie where it’s worth the extra price of admission. This may not be the most important science fiction movie released in 2012 (Prometheus – I’m looking at you) but I’m sure it will be the most fun. So put on the black suit and sunglasses (you might want to take the sunglasses off during the movie – just a suggestion) and go check out Men in Black 3.