Vote For Fervr in the Webby’s 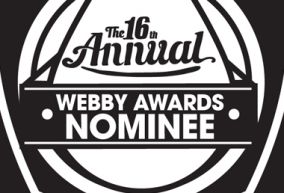 Fervr is a website that I (and many others) write for. Quite frankly, I think it’s the best Christian youth website on the net. And we’ve been nominated for an award! The Webby Awards are a pretty big deal and we’ve been nominated for the People’s Choice Award for Religion and Spirituality Websites. Could you take a moment to head to the voting page and help us win? We need every vote we can get! Voting closes Thursday April 26th.

After the jump is the official press release from Fervr.

We were very excited here at Fervr to receive an email last week letting us know we had been nominated for the biggest award on the internet – a Webby.

We’re in a David versus Goliath battle, as we compete with some of the big boys of the internet. We’re up against four other sites (including CNN) for best Religion and Spirituality Website.

An early thank you speech

Fervr only exists because of people like you, who visit our site, read the articles, and then let us know when we are doing things right, and when we need to make changes. It’s cliched, but true – we couldn’t have done it without you. Thank you for helping spread the word about Fervr!

We are also humbled by the amount of hours our contributors are willing to spend to come up with godly, insightful, and challenging content. All of the people who write for Fervr are volunteers, who work very hard to build up young Christians, and encourage others to consider the claims of Jesus. Most of them have real jobs too… and spend half their weekends working with young people at churches and youth groups.

Of course, we all make the effort with Fervr because we believe the gospel is the greatest thing ever, and we want to help you “press on toward the goal to win the prize for which God has called [you] heavenward in Christ Jesus” (Philippians 3:14).

You can help us!

As a nominee, Fervr.net is also eligible to win a Webby People’s Voice Award, which is voted online by fans across the globe. From now until April 26th, Fervr.net fans can cast their votes at pv.webbyawards.com/ballot/28

We would really value your support of Fervr, and hope you will vote for us.

Winners will be announced on Tuesday, May 1, 2012 and honoured at a star-studded ceremony on Monday, May 21, 2012 at The Hammerstein Ballroom in New York City, where they will have an opportunity to deliver one of The Webby Awards’ famous 5-Word Speeches.