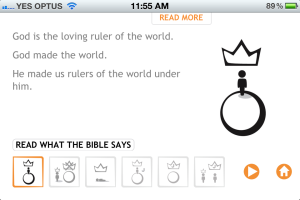 Last year I bought myself a smart phone and a tablet computer. I’d been holding out for a while but finally caved in. I didn’t think I’d really need either. Now it feels like I can’t live without them. Me and my stupid addiction to technology. One of the things I love about my devices are the apps – computer programs that do all kinds of weird and wonderful things that you download from the store and are accessible at the touch of a button. I’ve got apps for games, social network, email, photos and more. But there’s one app that I’ve wanted since day one. And it has eluded me.

This week, the 2 Ways to Live app was launched.

2 Ways to Live from Matthias Media has been a trusty companion to me for many years. Being someone who thinks visually (all those comic books at home aren’t just for show), I’ve really appreciated having a visual means to explain the gospel to people. I wouldn’t have a clue how many times I’ve drawn those six boxes on pieces of paper or whiteboards. Explaining how God made everything, how we rejected God, how the punishment for our rejection is death, and how Jesus came to solve the problem – this framework has guided me in many conversations and class room discussions. It has helped me not only explain the gospel, but understand it myself.

But these days, I don’t always have a pen handy. Or a piece of paper. I’m a 21st century digital boy. But I always have my phone in my pocket. That’s why the 2 Ways to Live app is so valuable to me. With a tap of the screen, I can guide people through the six boxes, bit by bit. There’s also a guided audio version, spoken by Kel Richards. Kel’s delivery is smooth and easy to understand, just what you’d expect from such a gifted orator.

There are a couple of helpful features of this app, that for me, make this more useful than when I present it myself. Firstly, the written sections are available in five different languages: English, Spanish, French, Japanese, and Chinese. This is are great help for those of us who live in multicultural areas. When speaking to people who struggle with English, hopefully this feature will help close the language barrier. Secondly, there’s an option to gift this app to someone else. After explaining it to someone, I can pay to have the app sent to them so they can look at it again in their own time. At 99 cents, that’s a bargain for sharing the gospel.

The 2 Ways to Live app is currently available for the iPhone. While the app also works on the iPad, there seems to be some bugs at the moment – the pictures and the audio work, but the written text is absent. A more developed iPad app is apparently on the way (hopefully with these bugs corrected). A wait and see approach is currently being taken with an Android release.

If you are passionate about sharing the gospel with people, this is a must have app. You can download it at the app store.

One response to “2 Ways To Live App”