Comic of The Week: Wolverine and The X-Men #3 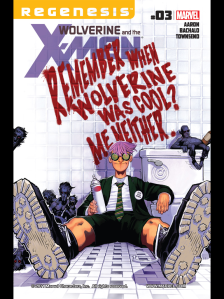 When the first issue of Wolverine and The X-Men was released, I wasn’t going to pick it up. It’s been a long time since the regular X-Men titles grabbed my attention. But when I saw the cover to Wolverine and The X-Men #1, I knew I had to give it a shot. This is the X-Men comic that takes my three favourite X titles of all time – Morrison’s New X-Men, Milligan/Allred’s X-Force, and Lobdell/Bachalo’s Generation X – mooshes them together and then let’s things get freaky from there. It shouldn’t work. But it does. And so far it’s my favourite X title in a very long time.

There’s been a split in the X-Men. Half of them have stayed with Cyclops in San Francisco, while the other half have followed Wolverine back to New York to restart the school. Not only is this a school for kids with super powers, it’s designed by people where reality is an optional extra. But I guess when you’ve got Wolverine as your school’s headmaster, things weren’t exactly going to be normal. On the first day of classes, the school is attacked by a group of insanely rich and psychopathic twelve year olds who wreck havoc on the school. And the day is saved by Quentin Quire, one of my favourite under-rated X-Characters. This title is wild and crazy and I’m in for the long run. 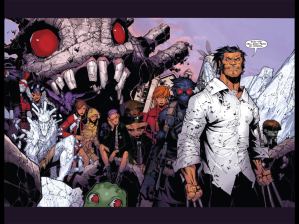 What am I looking forward to next week?

Here’s what’s on my list so far to check out next week:

Fury of Firestorm: The Nuclear Men #4

Anything else I should be reading this week?