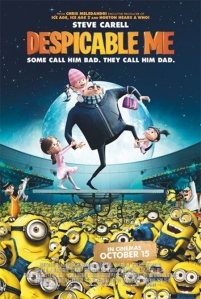 As I sat down to watch Despicable Me, one thought dominated my brain space for the full 95 minutes of the film: Why aren’t I enjoying this? There are evil geniuses running around doing wildly over-the-top shenanigans. There’s a legion of yellow oompa loompa style minions speaking in their own made up language and providing comic relief. Some of my favourite comic actors, such as Jason Segel, Will Arnett and Jack McBrayer are providing voices. I should be entertained by this movie. Instead, I was bored. And I think I know why.

Firstly, let’s take a look at what worked. Despicable Me is a 3D animated movie. And that 3D is spectacular. I can’t stand it when a movie comes out in 3D and does nothing with it. The roller coaster scene is worth the price of admission alone. And there’s a scene at the end where the minions try and cross from the screen into the audience. If you’re seeing this in 2D, you’re really missing out.

Any scene where Gru, the evil genius protagonist voiced by Steve Carell interacts with the three orphan girls he adopts is heart warming, in a not-cheesy good way. How the girls effortlessly accept Gru’s bizarre eccentricities and lifestyle and embrace the inherent hijinks is ripe for comic potential. And whenever the movie makers mine that potential, they strike gold.

But herein lies what I think is the biggest problem for me enjoying this movie: the movie makers can’t make up their mind what this movie is about. Is it a movie about an evil genius finding the love and approval he never received as a kid? Yes. Is it a movie about an older evil genius trying to stay ahead of the young guns? Yes. Is it a movie where weird things happen and that’s okay because in this world weird is normal and cool? Yes. Do all these stories work together in this film to produce something harmonious and unified? NO!

The relationship between Gru and the girls is the heart of the movie. So of course, the girls spend the first 30 minutes of the film in the background doing nothing while Gru fights it out with young gun Vector (voiced by Jason Segel). If they had cut Vector out of the movie to make more time for the girls, there would be a greater chance of me enjoying this movie. Don’t get me wrong, Jason Segel is one of my favourite comedic actors. He’s just very poorly cast for this role and detracts from the parts of the movie that work.

Then, at the end of the movie, the creators feel that there needs to be some kind of moral. Because all kids movies must have a moral. Problem is, the moral doesn’t seem to fit either the tone of the movie or the character development seen so far. Things happen not because the characters would act that way, but because the moral needs setting up. This is a great black comedy setting. It could have been a modern day Addams Family. But instead it’s a collection of ideas that could have worked but somehow missed the mark.

For me, the best part about Despicable Me is the three girls. The evil genius Gru adopts them as part of his evil scheme (an evil scheme that is zany-evil rather than evil-evil). These girls had no-one. Now they have a dad. admittedly, he’s a pretty strange dad. But he comes to love his girls and they come to love him. No one else wanted these girls. The woman who runs the adoption agency tells them that no one will ever want them. Yet Gru chooses them.

Adoption is one of my favourite words. A kid who is unable to be with their parents (for whatever reason) is chosen by someone who will love them and welcome them into their family. The child goes from being alone to being part of a family. Best of all, they are chosen. It’s not some kind of accident, but a deliberate decision to welcome this kid into the family.

As a Christian, I have been adopted. The king of the universe has chosen me to be part of his family. Before I was nothing, completely unworthy of his attention. But now, I’m able to call him Father and receive all the benefits of being his son. “For you did not receive a spirit that makes you a slave again to fear, but you received the Spirit of sonship. And by him we cry, “Abba, Father.”” (Romans 8:15) The adoption these girls experience in the movie is good. The adoption we experience in Christ is far greater.

I want to like Despicable Me. I really do. I think the biggest problem is that the movie tries to have a plot. The set up and style seem to work best without a story and seems to fail whenever they try to have one. Perhaps this may have been more enjoyable if it had been 90 minutes of random funny stuff.