When I was a teenager, we didn’t have the internet.

And yes, if I did have a lawn, I’d be telling you to get off it.

But I’m sharing this nugget of old person information with you to show you how different it was for the pop culture junkie in the 90’s compared to today.

Cast your mind back to 1994. In 1994 I turned 15 and lived in middle class suburban Sydney. We had five channels on TV, a cinema in the next suburb and a video shop down the road. That’s right, a video shop. The kind that rented VHS tapes because we’re living in pre-DVD territory. The internet, at least to me, was only a vague rumour at this stage. Sure, there were online bulletin boards, but they were reserved for your uber computer geeks. I like my computer, but not that much.

Even back then, I knew I liked movies that were a bit different to the ones

every one else liked. While I enjoyed the same block busters as everyone else, they didn’t fill me with as much joy as the strange little films I was beginning to discover. I had begun to fall in love with the cult movie and the even rarer but just as much fun cult television show.

With no internet, there was no searching youtube for clips of strange movies. There were no forums where you share your favourite offbeat films. The rise of the DVD home library, where every thing and everything, from cult films to TV box sets, is available for purchase, was a good 10 years away. You couldn’t walk down to JB’s and look for obscure films because JB’s didn’t exist.

The elusive nature of these cult films made the search all the more sweeter. I would scour the library for books on film, carefully noting the names of movies that were universally loved by critics but unheard of by my friends. I would spend hours at the local video shop, looking for B-grade movies, hoping against hope that something new had sneaked onto the shelves (or more importantly, hoping that someone had borrowed part one of a movie series and that it would be back in next week, because I didn’t want to start watching with the sequel). I’d get my hands on movie magazines to see what movies were being released at the art-house cinemas and wishing I knew where those cinemas were or how to get there.

But the greatest thrill of all was watching SBS on a Saturday night.

If I wasn’t home, I’d record it. Because on Saturday nights, the TV station SBS showed the weird stuff. The obscure supernatural drama from Denmark. The quirky anime from Japan. David Lynch films. I didn’t care if it had subtitles. I didn’t care if I didn’t understand what was going on. I had to have more.

And so grew my passion for cult media. I’d make my younger brother sit down and watch bizarre cartoons with me. He doesn’t remember it, but I remember going along to one of his school’s open days when he was in year one and his teacher showed me one of his creative writing efforts. She was amazed at his original ideas. I wasn’t. He was retelling the SBS cartoon we watched every weekend.

I’d tell my friends all about the shows I loved. I’d record them and invite my friends over to watch them with me. I’d try and convert them to my cult film loving ways. I’m still a little upset with the sudden popularity of South Park in Australia – a full year after I’d been telling my friends all about it and they dismissed me.

These TV shows and movies were an essential part of my life. To me they weren’t just entertainment, they were part of my identity. I wanted people to share it with me because I couldn’t understand how they could live with out it.

Just as I wanted to share those movies, now I wanted to share the news of Jesus with people. Before I would take every opportunity to tell people about these films. I would invite them over for movie marathons. Compare the films to other films they might like. Do my best to convince them that this film is the greatest thing they have never seen. 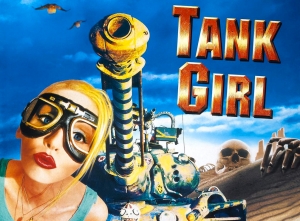 These days, I want to use that same amount of passion and zeal to share Jesus. For those of you who love something that is left of mainstream, that other people just don’t understand, I’m sure you share this feeling. You just know that if they knew how good it was, they’d want to know more. Well if you’re a Christian, you have a great advantage – your love of Jesus is not based on taste. It is not based on opinion. It is based on something that is true and real.

An ongoing feature here at Pop Culture Christ will be my love of cult films. The kind of movies and shows that I put in the DVD player (or in some cases VCR because they’ve never made it to DVD) when a bunch of mates come over. The kind of movies that I’d know they’d love if they gave it a chance. I want to explore what it means to love and share these films as a way into understanding the why’s and how’s of sharing Jesus.

Some of the films and shows I’d like to look at include (this is not a comprehensive list, just off the top of my head):

And loads more. If you have a particular cult movie favourite, let me know in the comments. Have you ever had any experience either as a cult film lover or as someone on the receiving end of a cult film lover’s attention?

3 responses to “Where I Share My Love of Cult Movies”