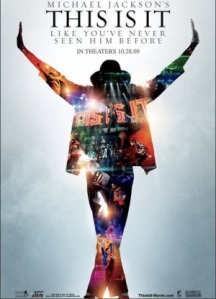 It was going to be one of the biggest concerts ever. After ten years, Michael Jackson was set to return to the stage. However, days before the final dress rehearsal, Jackson passed away. People all over the world were in mourning. And many wondered what that last show would have been like. This Is It takes video recorded during numerous rehearsals to give us a glimpse of what we might have seen. It also serves as tribute to the man named “The King of Pop”. This is both more and less than a concert recording. It’s less than a concert recording for various reasons which I will outline below. More importantly, it is more than a concert recording because of the glimpse we get not only of Jackson: the man, but also of Jackson:the object of worship.

If you’re walking into the cinema expecting to watch Michael Jackson’s final performance, you’re going to be disappointed. And it’s not an unreasonable expectation, considering the hype, the limited run (only at the cinema for two weeks), and the sale of t-shirts and CD’s at the box office. But this is not a concert. It’s not even a dress rehearsal. Jackson was still in the process of getting the musicians and the dancers to come together and polish their work. What we have here is the promise of something big that we will never see. Jackson himself is holding back. There are numerous dropped lines and false starts. When ever he starts to let go and really put all his effort into his singing, he berates those looking on for encouraging him to waste his voice. What we hear here is not what we would have heard in concert. He was saving his voice for the concert that never was. This Is It is a performance that never gives its all and as a result, it is difficult to feel drawn in by it.

What was of greater interest to me were the interviews with the dancers, musicians and everyone else that was working on this project. They tell us how great an honour it is to be working with Jackson. The opening scene features a group of male dancers auditioning to be part of the show. For them, this was it. This was the dream. Michael Jackson was not only their inspiration but their reason for living. They couldn’t see past this moment because the purpose of their being was now being fulfilled. Michael Jackson was their god.

At one point, one of the crew observes that they are on stage at the Church of Rock and Roll. The stadium was their church and the entertainer was their god. I would have like to have seen some interviews taken after Michael Jackson’s death. I would have liked to have heard the dancer, who at the beginning of the movie had lived to perform on stage with Jackson, only now to have that dream taken away. How did he feel now? Does his life still have purpose now that Jackson was gone and the concert was never going to happen? How did it feel to put your trust in a god that perished?

Michael Jackson was worshipped by many. But he was not God, he was just a man. His legacy may live on. Then again he may be completely forgotten within a century. Those who lived for Jackson are now living for nothing more than a memory. And in time that memory will fade. Don’t put your faith in something or someone that will perish, fail, or fade. Don’t worship anything or anyone that promises much but ultimately can’t fulfill.

Jackson was not God. But Jesus is. He is the one and only way to eternal life. He has proven his worthiness by rising from the dead. Death had no hold on Jesus. And now he sits at God’s right hand, waiting to return. God has raised this Jesus to life, and we are all witnesses of the fact. Exalted to the right hand of God, he has received from the Father the promised Holy Spirit and has poured out what you now see and hear. (Acts 2:32-33). Put your faith in Jesus. He alone can bring a purpose to your life that will last beyond this world and into the next.

This Is It is an interesting movie. If you’re a massive Michael Jackson fan, you’ll probably enjoy it. If you’re someone who appreciates his music but didn’t break into tears when you heard he’d passed away, you’re probably better off waiting for this on DVD.