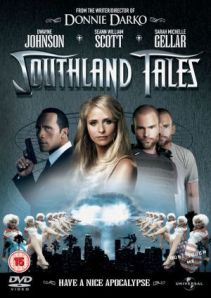 Donnie Darko is one of my favourite movies of all time. If not my all time favourite. A few years ago, I started hearing word of Richard Kelly’s next project, Southland Tales. And I waited. And I began to believe this movie was mythical. IMDB said it existed. Movie reviews said it existed. But I just couldn’t get my hands on a copy. I was hesitant to buy a copy of a movie I hadn’t seen before. What if it wasn’t worth the money? The reviews I had read weren’t very complimentary. But then I found it. Sitting on the shelf at my local video store in the weekly section. And it was $1 Tuesday. Score!

So was it worth the wait? Was it a work of unappreciated genius or an utter disaster? With an abundance of recognisable stars, a soundtrack by Moby, and special effects galore, there’s a lot going for this movie. It’s an apocalyptic tale of the end of the world. It’s a satire of the war on terror and the infringement of civil liberties. It’s a music video. It’s a love story. It’s a science fiction tale involving time travel and creepy psychic scientists. It’s a multi-media experience involving comic books and websites. It’s all of these things and more.

Have a nice apocalypse.

After a nuclear attack in modern day Texas, the USA commits itself to several large scale wars in the middle east. In response to this critical war, the American government have cranked up homeland security and surveillance to protect the people and are in desperate need of alternate fuel sources seeing oil from the middle east isn’t exactly forth coming. Society is on the brink of disaster. Neo-Marxists cells spring up, determined to take down the government. But all hope is not lost. The Baron, a mysterious scientist with his fingers in many pies, presents a solution – Liquid Karma, which promises to solve the energy crisis as well as bringing some other interesting results.

Narrated by Pilot (Justin Timberlake), an all seeing, disenfranchised soldier with visions of the future, Southland Tales follows three individuals whose paths cross through out the movie: Boxer Santaros (Dwayne Johnson), amnesiac action movie star with political connections who has just written a screen play which eerily seems to predict future events; Krista Now (Sarah Michelle Gellar), an entrepreneurial porn star with prophetic visions who is caught up in the Baron’s plans; and Roland Taverner (Seann William Scott), a soldier returned from the war who impersonating his police officer twin brother in an attempt to discredit the government. As these three individuals become aware of what is really going on behind the scenes, they come to realise that this may in fact be the end of the world and that there’s nothing they can do to stop it.

Southland Tales is a movie that needs to be watched more than once. There is a definite sense of information overload. It can feel like you’re being bombarded with information that at first seems like scene setting but turns out to be crucial to the story being told. On top of this there is an explosion of visual stimuli. The creators have not been subtle with the visual feel of this movie, which can be quite overwhelming at first. By the end of the movie, I began to see how it all fit together. What felt like ham-fisted broad-strokes at the start of the movie became nuanced story telling devices by the end. This is a movie to be watched multiple times. It deserves to be dissected over and over with friends. It is not a movie for the lazy viewer who wants everything explained to them simply and offered up on a platter. It needs to be worked for.

The book of Revelation is often quoted in movies, television, etc, to give a sense of gravitas and forboding. As Timberlake’s voice over repeated these oft heard words, I thought nothing of it. Generally I find Bible verses in movies to be stylistic choices that don’t really add anything to the movie. So I ignored it. Until I realised – Southland Tales is the story of Revelation retold through the lens of 21st century fears of the end of the world. It’s all there: the whore of Babylon, the anti-christ, the two witnesses, etc. The story of Southland Tales is the story of Revelation. Timberlake’s narrator acts as the apostle John, watching the end of the world unfold before him and struggling to communicate what he has seen to those who will listen. Once this revelation (excuse the pun) dawned on me, I saw the movie in a new light. The promise of the end of the world in this movie’s advertising was not an empty one.

The biggest difference between Southland Tales‘ apocalypse and the Biblical one is where it goes after the world ends. The movie finishes with the end of the world. And then the credits roll. The viewer is left to ponder what happens next. Not so with the book of Revelation. When Christ returns and this world comes to an end, justice will be done. Jesus will call all of humanity to account for their actions. And then all will be brought to justice. Those who follow Christ, who have put their faith in the redeeming sacrifice of Jesus on the cross, will enter the new creation, the new heaven and earth. They will live for eternity with God, free from the stain of sin. Those who reject Jesus, however, will face the unfortunate reality of eternity in hell. The book of Revelation may be filled with imagery and scenes that we find difficult to understand, but at its core, the message is clear. Jesus will come to bring justice. Will you spend your time after the apocalypse in heaven or hell?

As a treat, check out this dream sequence from Southland Tales, featuring Justin Timberlake.