Harry Potter and The Half Blood Prince (2009) 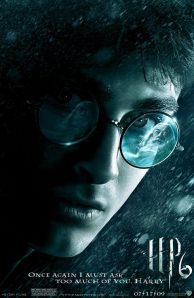 Harry Potter and The Half Blood Prince (2009)

Is anyone reading Harry Potter reviews and actually undecided about whether they want to see this movie or not? This is the sixth movie in the Harry Potter juggernaut. By now you’ve already made a commitment to the series. And if you haven’t seen the first five movies in the series, Half Blood Prince is a really bad place to start. This movie is filled with raging hormones and the darkening of the Harry Potter world. There’s way too much of one, not enough of the other.

It’s time for Harry to begin his sixth year at Hogwart’s school for magic. After the events of Order of the Phoenix, The Dark Lord Voldemort’s presence is no longer a secret. The forces of darkness are acting openly, spreading fear through out both the magic world and the non-magic world. Harry knows that he will be the one to face Voldemort, so he must prepare by getting to know his enemy. Meanwhile, Draco, Harry’s school rival, has been conscripted by Voldemort for a dark task.

As the Harry Potter movies have progressed, there has been an increasing emphasis on the romantic going ons of these adolescents living in a magic boarding school. And that’s an element that shouldn’t be absent from a movie about a group of teenagers living away from home in close confinements. The problem here is that the romantic plots here are unconvincing and get in the way of the greater themes of the movie. The scenes between Harry and Ginny are forced and seem to come out of nowhere. And the focus on Ron’s romantic escapades robs the movie of precious minutes that could have been spent on Draco’s plight and the buildup of just how evil Voldemort is.

I would have found The Half Blood Prince far more interesting if there was a greater focus on Draco’s tragedy. Here is a young man who is being forced to commit an evil act that he wants no part in. And as Harry grows in his knowledge of Voldemort, his antagonism with Draco grows. How does it feel to know that your arch enemy is the chosen one and is destined to defeat the evil one who threatens you and your family into serving him? That’s what I would have liked to have seen more of.

Also absent from this movie that I would have liked to have seen is the battle scene at the end that was in the book. This movie needed more action and it was strange to see this lengthy scene omitted.

The Half Blood Prince is a movie where there are good guys and bad guys. There is very little room for gray in the Potter universe. You’re either working for the forces of good or the forces of evil (with one very notable exception). And in this movie, the forces of evil are out in full force. There is a feeling that their power is all pervading and that there may not be any hope left. When you’re got one 16 year old up against the most powerful evil wizard of all time, it would be easy to believe that evil has won. The same thing applies in the real world. Things can get pretty dark. The presence of sin has corrupted this world so much that it feels like evil has won. But no matter how dark things get in The Half Blood Prince, there is always light. Harry and others use their wands, their power, to light the way. In one scene, a large number of wizards use their wands to dispel the darkness, the fight off the lingering presence of evil.

Jesus is the ultimate light in the darkness. “This is the verdict: Light has come into the world, but men loved darkness instead of light because their deeds were evil. ﻿Everyone who does evil hates the light, and will not come into the light for fear that his deeds will be exposed. ﻿But whoever lives by the truth comes into the light, so that it may be seen plainly that what he has done has been done through God.” (John 3:19-21). Sin may seem like it has control of this world. But Jesus has entered the world as the light. He will dispell the dark. By dying on the cross he has defeated sin. And he has promised that he will return. And when he does he will rip sin out of this world and destroy it once and for all. Sin, like Voldemort, will be defeated. We just have to wait for the end of the saga to see it happen.