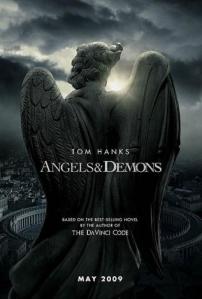 Science and religion. More often than not they’re seen as bitter enemies. Some would even want to say that science has proved there is no God and following religion is a waste of time, a pursuit for stupid people. This tension is at the heart of Angels and Demons. In the wake of the death of the pope, an old enemy of the Roman Catholic Church has returned and is threatening to blow up the Vatican. It’s up to symbolologist, Robert Langdon (Tom Hanks), to save the day and solve the mystery of the Illuminati.

If you’ve seen The Da Vinci Code, you’ll be familiar with the team making this movie. I was not a fan of either the book or movie of Da Vinci Code, but had higher expectations for Angels & Demons. Firstly, I thought the book was better, spending less time on being “clever” and more time focusing on delivering a good story. Secondly, the story was less about demolishing the foundations of Christianity with historically dodgy speculation. So I walked into this movie with out any negative preconceptions.

Angels & Demons both suceeds and fails. It suceeds in producing an enjoyable, popcorn adventure. Langdon has five hours to save the day. This gives the movie an urgency that was missing in Da Vinci. There is also more of an emphasis on action scenes. If you want to see a movie about the day being saved at the last minute, then Angels & Demons is a success.

However, Angels & Demons fails when it comes to exploring the theme of science versus faith that is at the movie’s core. The reasoning for the attack on the Vatican is steeped in scientific exploration. The creation of the “God particle”, the tool used to threaten the city, is seen by some as science disproving God  and others as science going too far too fast. But this issue is rarely explored. Even at the end of the movie, the tension between science and faith is brushed away as being insignificant. I agree that science and faith should not be enemies. But it was a great opportunity to explore these arguments, an opportunity that was missed.

At the end of the day, science and faith are dealing in two very different realms. Science asks how things are, but can never answer the question of why. The Bible tells us about the creator of the universe who wants to know us and has a plan for us. Genesis doesn’t explain the mechanics of creation. But it does tell us why God created. Science can’t do that.

The Roman Catholic Church was not a supporter of this movie being made. They denied the makers access to their buildings, among other things. After The Da Vinci Code, who could blame them. However, the movie is very sympathetic to the Roman Catholic Church and gives an insight into the workings of the Vatican that many would never have seen. The Roman Catholic Church has nothing to worry about this film. Same with anyone concerned that they were getting another poorly thought through attack on the Christian faith.