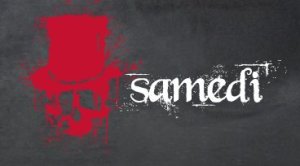 To get your product out there these days, you need a hook. Especially in the ultra-hip, overly-cool, way x-treme world of energy drinks. But is it really a wise move to contact ancient Voodoun spirits to sell your product?

Samedi is a new energy drink being released in Australia. How are they differentiating this drink from all of the other energy drinks on the market? Well this one is named after Samedi, the Voodoo spirit of sex and resurrection. He’s closely associated with the zombie aspect of the Voodoo faith. Yes, that’s right, George A. Romero didn’t invent zombies. It’s got deep roots in Haitian pagan religion. And that’s the imagery that the Samedi energy drink is conjuring up.

It’s one thing naming your drink after a pagan spirit. We’re operating on an entirely different playing field when you send a team of people to witch doctors to conjure the spirit of Samedi and seek his blessing. In a series of videos on the official site, that’s exactly what they do.  This is dangerous stuff. It’s not something to be taken lightly. In one of the videos, the team approach a voodoo priest who says “You don’t have to believe in Voodoo for it to work against you.” He’s right. These are evil spirits. They are not from God. And they are dangerous. Meddling with these kind of forces is a terrible idea. As Christians, we believe that there is a spirit world, that there are evil forces at work in this world. Don’t mess with them. Ephesians 6 warns us to be ever vigilant about spiritual warfare. The makers of Samedi are dabbling in dangerous things. The website even describes a Voodoo ceremony you can do with a can of Samedi to call on the spirit’s help. Friends, do not try this at home.

Should a Christian drink Samedi energy drink? I think it’s a similar situation to what the early Christians faced when it came to eating meat sacrificed to idols. In 1 Corinthians 8:1-13, Paul talks about this issue. He reminds the Church in Corinth that they have a freedom to eat the meat offered to idols because there is only one true God. And that our status as children of God is based on God’s grace, not following laws. But if eating the meat causes us or others to sin, then we shouldn’t do it. If drinking Samedi points you towards pagan practices and beliefs, don’t drink it. If drinking Samedi causes others to doubt your commitment to Christ and it causes them to sin, don’t drink it.

I don’t think Samedi is harmless. I think it is something to be aware of. If you choose to purchase and consume Samedi, be aware of what’s going on.