Sword of My Mouth #1 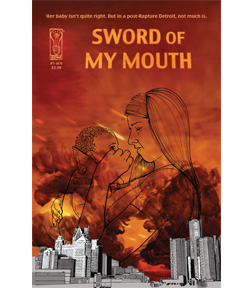 Her baby isn’t quite right. But in a post-Rapture Detroit, not much is.

So, those pesky Christians are gone. Magic works and those pagans are going ahead with their witchcraft and physical mutations. Angels roam the streets, enforcing martial law. And young, single mother Ella battles loneliness.

Sword of My Mouth is the sequel to the graphic novel Therefore Repent! It’s a six issue miniseries being put out by IDW. My big question for Sword is this: is it going to be exploring Christian issues like Repent did or is it going to go in a new direction?

Sword of My Mouth #1 is written by the same author as the previous volume, Jim Munroe. Joining him on art is Shannon Gerard. Gerard brings an interesting art style to this book. Traditional panel borders are almost non existent. The arrangement of the characters gives the whole book an almost dream like quality. At one stage I actually did think a scene was a dream sequence until the context showed that it was really happening. The lettering also took a bit of getting used to, but grew on me.

But Joel, tell us about the plot. Well, Ella (I had to search for her name online because I couldn’t find it mentioned in the book) is a young mum struggling in this strange new world. She’s lonely and is looking for companionship. She writes a letter to her baby’s father, a man named Andre, a letter she never expects him to see. There is a suggestion that there might be something not quite right about the baby’s mouth, but at this stage we don’t know what. It’s a touching tale of a woman longing for connection, but nothing particularly Pop Culture Christ worthy. Until the end.

Two red neck guys with holes in their hands stab a guy in the side, killing him. They then go ahead and stab both his hands. They do this in expectation that he will rise again. Are these men delusional sociopaths in a society full of magic? Or is there something greater going on here? Has Christ returned? We don’t find out in this issue, but it looks like this story will be carried on in future issues.

Will I be buying #2? Probably not. #1 has a cover price of $3.99. That means it cost me $8 Australian. That’s a lot of money for a black and white comic. Especially when the inevitable trade collection will most likely set me back far less than $48. I want to find out more, but will wait for the trade.