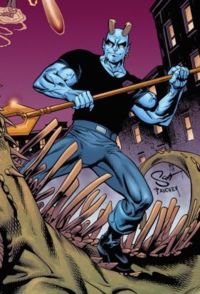 Would you sell your soul to the Devil for superpowers? Think of all the good you could do as a superhero. All the lives you could save. Wouldn’t all that be worth the sacrifice of your soul? Isn’t that the kind of thing Jesus would do? That’s what Daniel Cassidy aka Blue Devil did. But was it worth it? And is it even possible?

Daniel Cassidy made his first appearance in the DC Comics Universe in 1984. He was a master of special effects who doubled as a stunt man. Trying out a robotic suit (modelled to look like a blue devil) for a new movie, he is caught in the cross fire of a real life demon. He finds himself permanently bonded to the suit. There’s no way out of it. So he becomes the superhero Blue Devil.

A few years later, Neron, who represents Satan in the DCU, was going around making deals with a whole stack of people. He was offering power upgrades to super villains left, right and centre. And even some heroes. Neron approached Cassidy with an offer – fame beyond his wildest dreams in exchange for a simple act of destruction. He says sure, why not. However, the ensuing explosion leaves his best friend dead. Funny how these things tend to backfire, isn’t it? Even worse, Cassidy dies not long after and comes back to life as a full blooded demon. Maybe doing deals with the Devil wasn’t that great an idea after all. Cassidy might be famous, but he’s sold his soul to the Devil.

It’s a common thing in fiction to see people selling their souls to Satan. But the question on my lips is this: what’s in it for Satan? Why would Satan try and buy your soul? Because at the end of the day, your soul does not belong to you. If you are a Christian, then your entire being belongs to God. 1 Corinthians 6:19-20 reminds us that “You are not your own; you were bought at a price.” If we believe that Jesus conquered sin for us, then we have been bought buy God. We belong to him. On the other hand, if you’re not a Christian, your soul isn’t your property either. Because it doesn’t matter how good you are in this life, if you don’t belong to God, you belong to hell. If you’re not a Christian, then Satan is already getting your soul. He doesn’t have to buy it off you – it’s his property. That’s why selling your soul to Satan just doesn’t work. Either your soul belongs to God and can’t be sold or it already belongs to Satan and he doesn’t have work to get it.

Even if you could sell your soul to Satan, that would be the stupidest thing ever. A life time of fame and glory for an eternal life of torment in hell? It just isn’t worth it.

Daniel Cassidy recently won back his soul during a legal battle in hell. He still has the demon form, but he’s his own man again. It’s a good thing he’s a comic book character, because he just can’t happen in the real world where Jesus is boss.