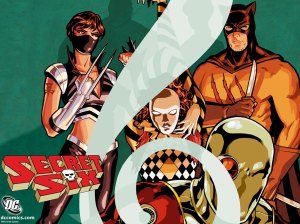 This is the story of six strangers picked to live in a house and work together to find out what happens when people stop being polite and start getting real.

Gail Simone has been the primary author of The Secret Six over two miniseries, an arc in Birds of Prey and now in their own ongoing series. The current Secret Six (there was an earlier Secret Six that has little to no connection to this team, so let’s move on, m’kay?) first appeared during DC Comic’s Countdown to Infinite Crisis mega crossover in 2005. Some big name super villains came to the conclusion that life would be easier if they got organised. So by a combination of enticement and threat, most of the world’s super villains joined The Society. Those who refused were hunted down and made an example of. Villains like the Secret Six – Six villains that didn’t want to be good guys and didn’t want to be part of The Society. Six villains doing what they want, when they want, for the price they want.

There membership has changed a few times since then, having team members quit, die or turn traitor. The current line up features:

In the first story arc of their ongoing series, The Six have taken on a job – they are to break someone out of jail who has in their possession a small package. They are then to deliver her and the package to Gotham City. Before they know it, there’s a price on their head and every super villain in earshot wants a piece of them.

Why is everyone so eager to collect the bounty on The Six? It’s not so much the money as the nature of the package they have acquired. It’s a small card. And printed on it? “Get Out of Hell Free”. Legend has it that Neron, one of the Satan figures in the DC Universe, created this card, enabling the bearer to escape hell, no matter what they have done. It’s a one use only card and everyone wants it. No one is even sure if the card is legit, but that doesn’t stop them from trying to get their hands on it.

What about the rest of us? We’re no where near as bad as The Secret Six. I don’t know about you, but I’ve never killed anyone. I’ve never committed a crime that would put me on the Most Wanted list. Surely, I’m good enough for heaven. I would have no need at all for the “Get Out of Hell Free” card. That’s true, isn’t it?

The Bible tells us that there is no one good. No one who is good enough to get into heaven (Romans 3:10-12). Because of our sin we are all headed straight to hell. There’s nothing we can do to avoid it. If only we had a “Get Out of Hell Free” card. If only there was a way to escape from hell that was independent of our attempts at doing good. Because “trying to do good” doesn’t cut it. We can never be good enough to make it into heaven on our own.

But we do have a “Get Out of Hell” free card. And the beauty of it is that there isn’t just one. God has made it possible for everyone to get there hands on this card. This card is called Jesus. Even though we are the bad guys, Jesus died on the cross, taking the punishment for our sin for us (Romans 5:8). Any one who accepts this free gift goes straight to heaven – no time in hell for Jesus’ followers. And, even better than the card in Secret Six, there is absolute assurance. The Six aren’t sure if the card is legit or not. We know, because of the faithfulness of God and the evidence of the New Testament, that Jesus is legit. That his offer is legit. That he is the one true “Get Out of Hell Free” card.

In #6 of the series, the team have stopped at a roadside toilet block. On the wall is scrawled “Superman cannot save you. But Christ can.” The Six would be better off repenting of their sin, turning towards God for forgiveness, and putting their trust in the Christ who can save. How about you? Are you working desperately hard to be good enough to escape hell? Because if you are, you are setting yourself up for failure. Instead, follow the Christ who has done the hard work for you.