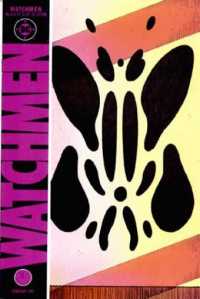 Friedrich Nietzsche is an interesting person. But if I was to throw a dinner party and could invite anyone from history? Nietzsche would definitely not be on the invite list. That would be way too depressing. One of the core points of Nietzsche’s philosophy is that there is no point to existence. Not exactly the bubbly disposition one would hope for in dinner time discussion. Watchmen #6 quotes Nietzsche in the final panel. Rorschach is a man who lives the Nietzschian ideal. I wouldn’t want to invite Rorschach to a dinner party either.

This issue is the “secret origin” of Rorschach. But it’s not Rorschach’s story. Not really. It’s the story of the man assigned to psychoanalyse him, Malcolm Long. Long spends many hours trying to get inside the head of Rorschach. What he finds instead is that Rorschach gets inside his head. In one scene, Rorschach disfigures a fellow prisoner who attempts to kill him. As he is hauled off by the guards, he calls out “None of you understand. I’m not locked up in here with you. You’re locked up in here with me.” We can see through Long’s notes that while he thinks he is in control and that he is rehabilitating his patient, it is the patient who is affecting the mind of the doctor. Long’s life becomes consumed by Rorschach, so much so that his life falls apart. By issue’s end, Long is no longer the happy, confident doctor, but sad, alone, and questioning the point of life at all. No one ever said this was a happy story.

Being in full time ministry, I am often warned of the dangers of working so hard that you neglect what is important. That spending too much time “on the job” and not enough time looking after my own prayer life and family is dangerous. That I need to take time to make sure I look after my self. That I need to hold sacred my relationship with my wife as she is my first ministry priority under God. We see in Watchmen #6 the dangers faced by becoming consumed with work. Long’s job is important. There are people out there who are sick and hurting and need our help. But at the end of the day we don’t do them any good if we’re falling apart ourselves.

At the end of the day, Nietzsche was so very wrong. There is a point to this life. There is a God who created everything and is in control. He has a plan and is working towards its completion. And nothing can get in the way of bringing in the glory that is the Kingdom of Heaven. No matter how bleak things look, no matter how sinful and ugly our lives become, God is in control.