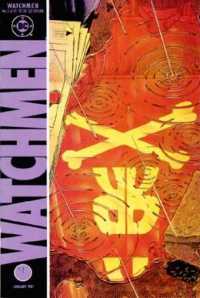 There once was a time when heroes were upright citizens. They fought crime and saved the world because that was the right thing to do. Being a hero was not just about saving the day but also making sure the way you saved the day was heroic and just. After Watchmen, heroes were ultra-violent nut jobs in trench coats with severe psychological problems and an inability to interact in social settings. Thanks Rorschach.

The theme of this issue is reflections. What do we see when we look into the mirror? And what is there looking back at us, lurking underneath the surface?

What happens: Rorschach pays a visit to an old enemy, Dan and Laurie try and work out how they fit in this world, Adrian Veidt, aka Ozymandias, is attacked by a would-be assassin, Rorschach is set-up and arrested by the police, and the whole world looks like it is inching closer to annihilation. And there’s more freaky pirate comic action going on.

What lurks beneath the surface? When we pull off the veneer, what do we find? For the protagonist in Tales of the Black Freighter, he sees the bloated corpses he has used to construct his raft. We begin to realise that this man’s good intentions are turning him into a monster. A father of two murders his daughters before killing himself, a troubling symptom of a world that fears there is no future. Likewise, we continue to learn more about what is underneath Rorschach’s “face”.  Just because he is one of the “heroes” doesn’t make him a good guy. He is dangerous. And underneath his “face” he may be just as much a monster as the bad guys.

What do we see when we look beneath the surface? When we look at our lives, search our hearts, gaze deep within ourselves, what do we find? Are we the good guys of the story? Are we the valiant hero? Or do we see the sin that infects every atom of our being? We are creatures of sin. We have rejected our creator and made a mess of every good thing he gave us. When you strip away the good guy mask we parade around in public, none of us come off looking good.

Yet despite this, we have a true hero. Not one who came to rescue the innocent, but to save the guilty. A hero who came to redeem the monsters. A hero who gave up his life so that the bad guys may live. “But God demonstrates his own love for us in this: While we were still sinners, Christ died for us.” (Romans 5:8) Jesus is the ultimate hero. Even though he can see what is beneath the surface, he saves us anyway. And unlike Rorschach, Jesus is a hero where the means are just as important as the end. He lived the perfect, sinless life. Rorschach may proclaim “No Compromise!” as his mission statement, but Jesus actually lives it. He never compromises who he is to save us. That’s the kind of hero I look up to.