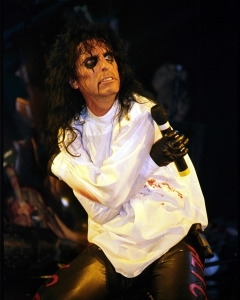 I’ve been thinking lately about boys becoming men. No, not Boyz II Men. That’s just wrong. You don’t say things like that in polite conversation. Can we move on now? I’ve been thinking about boys becoming men. At what point do you stop being a boy and start being a man? Are there only two options, or is there some kind of in between stage? Is there the Eighteen stage?

This is my favourite Alice Cooper song. You can take your No More Mr Nice Guy‘s. I don’t want to hear about Poison. Only Women Bleed doesn’t stand a chance. Eighteen for me is the definitive Alice Cooper song. There’s just so much angst and uncertainty rolled up into this song. And instead of playing the sympathy card, we get something new. Excitement. A revelling in everything that it means to be 18. To be considered an adult but not sure what that means. To be capable of anything but incapable of knowing what. To have that baby’s brain and that old man’s heart. I love Eighteen.

When do you become a man? Is it on your eighteenth birthday when you can legally drink, vote and be convicted as an adult? Is it when you break away from your parents and do things on your own? Is it when you get married and start your own family? It’s pretty ambiguous when that change happens. You walk through a high school play ground and you’ll find a mix of men and boys. Some of the men are chronologically younger than the boys, but you can tell that some thing’s different. Then you can look at these same men half an hour later and they’re boys again. It’s that in between stage. Where they’re both a boy and a man. They may not be 18 but they are the same age as the protagonist of Eighteen.

For me, a boy becomes a man when he takes responsibility for his own actions. When he starts thinking for himself and starts making his own decisions. This is definitely a process. It’s not some thing that happens over night. It doesn’t come along with a party or a ceremony. But at some point you’re no longer dealing with a boy but a man.

I think there’s a massive problem in our society of guys living in the Eighteen stage and never moving on to become full on men. They avoid responsibility. They continue on partying and acting like a teenager for as long as they can. In the past I have been guilty of this. Some days I relapse. But at some point you have to “man up”. I’ve used this phrase a lot lately. I’ve send to young guys that they need to man up. That they need to take responsibility for their own lives and stop looking to their parents and others to make decisions for them. To stop blaming the world for all their problems. To stop blindly following society because its the done thing. I’ve had to tell them to man up. To pick them selves up, sort out their relationship with God, their relationships with their mates and their relationships with the opposite sex.

Being 18 can be an exciting time. It’s exciting because it’s time to man up. It’s a time when you get to set the direction for your own life, to get out of the shadows of others. The problem is when you don’t move on to being an actual, real adult.

Man up. Work out where you stand with God. Are you just following him because you’re parents told you to and that’s what you’ve always done? Or are you following him because you’ve made a personal decision that he is your lord and saviour? If you have decided to follow him, get your act together and show some initiative in following him. Get yourself to Church. Get regular in showing up to Bible study. Tell your friends, tell strangers, tell everyone why you follow Jesus and not be ashamed.

Man up. Work out who you are and what you believe in. If you believe the Bible is true, let the Bible direct your life choices, not society. Don’t use “but that’s the way everyone acts in the 21st century” as an excuse to do what you know is wrong. Don’t be a sheep. Man up, take responsibility for your actions and be a man that brings glory to God.

Man up. Work out where you’re going when it comes to girls. For some, God has got the perfect girl lined up for you. For others, he’s got a life of singleness planned. Regardless, while you’re on the lookout for that great godly girl, start becoming the kind of man she would be interested in. Girls don’t want to marry boys. They want to marry men. Be a man both cares and looks after our sisters. Show some leadership. Show that you want to help them grow in their relationship with God. Show them that you’re the kind of man they would have no problem submitting to because you’re so full of love both for God and for them.