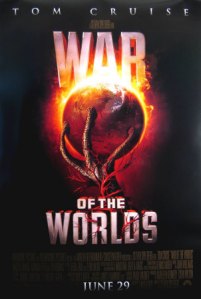 War of the Worlds

Some people just don’t cope well in a crisis. They get all flustered and confused and end up making things worse. I’ve heard slapping these people in the face helps them focus. I haven’t put this to the test yet, but if you and me are in a crisis, and you’re losing it, I’m slapping you for your own good. Because I’m one of those guys who thrive in a crisis. Give me a problem and a deadline and I’m in my element. But I’ve never been in the front lines of an alien invasion. How would you react?

In War of the Worlds, Tom Cruise plays Ray, a divorced man with two kids. It’s visitation weekend and Ray is struggling to connect with his offspring. He’s not used to being a dad and having a rebellious teenage son and a know it all pre teen daughter isn’t helping. And if things weren’t going bad enough as it was, aliens in giant tripod death machines (we think they’re aliens. It’s never made clear) launch their attack on Earth. Worst weekend ever.

What follows is Ray trying to keep his act together and keep his family alive. It’s an interesting movie as it’s told completely from Ray’s perspective. Ray is actively trying to avoid the aliens, so we’re not really privy to many battle scenes. We’re not on the front lines of this war. Sometimes we get close and catch a glimpse of what’s going on, but the spotlight stays on Ray the whole time. Which is why we’re never really clear on what’s going on. Think about it. If aliens did invade, your average man on the street wouldn’t have a clue what was going on. All he would know is that there are some massive, laser shooting things attacking and try to get out of the way. We’ve seen plenty of movies that show the big picture of an invasion. It’s a good change of pace to see the human impact.

For me, the movie falls down towards the end. There’s a scene where Ray stops running and starts fighting. It rang false to me. It seemed really out of character, both for Ray and for the movie. I guess that’s what you get when you follow H.G. Wells original ending.

The end of the movie got me thinking. I would really love to see a movie that starts where this one finishes. It doesn’t need to be a direct sequel – a thematic sequel would do just fine. I want to see a movie that starts the day after a massive alien invasion. I want to see a movie where people struggle to get their lives back together after every thing has fallen apart. Millions are dead. Political structures are in pieces. Infrastructure is out for the count. People don’t know if their loved ones are still alive and if they are, they’re not sure where they might be. It would be a great story, one full of hope out of hardship. Are there any movies out there like that? If not, does anyone want to make it?

What would you do in a crisis? What would you do if your whole world started collapsing around you? It doesn’t take an alien invasion for something like that to happen. You or a loved one may get sick. They might even die on you. You might lose your job, your home, your savings. Things that you thought were certainties might turn out to be nothing but a mirage. Your whole world could collapse on you tomorrow, leaving you with nothing. How would you cope?

If you were left with nothing in this world, would you have anything to hold on to? Something that is greater than you? Something that is rock solid and certain? For Christians, we have our trust in God. He isn’t just a made up fiction that we tell ourselves in order to feel safe at night. He isn’t some distant being that has no real interaction in our life. God is real and powerful and he loves us. In Psalm 62:5-8, it says:

my hope comes from him.

﻿He alone is my rock and my salvation;

he is my fortress, I will not be shaken.

﻿My salvation and my honour depend on God ﻿a﻿;

he is my mighty rock, my refuge.

﻿Trust in him at all times, O people;

pour out your hearts to him,

for God is our refuge.

God is our refuge. He cannot be moved. He cannot be shaken. He cannot be defeated. He will always be there and he will always be strong and compassionate. If you are one of his people, then nothing or no one can take that away from you. If you are a Christian then you will always be able to call on God as your refuge, no matter how bad things get in the here and now. Not only can we rely on God as our refuge now, but we long for the day when there will be no more times of crisis. No more times when things go sour. No more times when we are in pain, both physical and emotionally. We await the day when Jesus returns and we will be living in paradise with our God. Until then, trust that he is good and that he is our salvation.