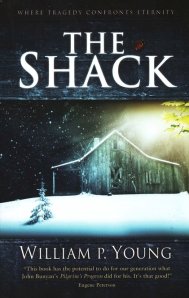 Why does a good God allow suffering in the world? It’s a question that comes up time and time again. As people who live in a fallen world, we are constantly confronted with tragic events. Why do good people die? Why are we attacked by natural disasters? If there is a God, why isn’t he doing his job? Why does he let bad things happen if he’s all that he’s cracked up to be?

Everyone struggles with this issue, Christian or not. We want someone to be held accountable for things that go wrong. As a Christian, it can be difficult to reconcile the God of love with the God who allows evil to exist in this world. What if there was a book that could explain this? What if there is a book that could help us understand who God is and what he has done? If only there was a book that could clearly explain God. The Shack is being put forward as the solution. The Shack is being put forward as a great way to understand God. Unfortunately, The Shack should not be a place you go to for answers.

The Shack is written by William Young. It is a work of fiction that tells the story of Mack, a man who has experienced tragedy in his life. He felt that he had escaped his dysfunctional and damaging childhood. But when his daughter is the victim of a serial killer, he descends into dispair. Then one day, he receives a note in his letter box. It’s literally a message from God, telling Mack to meet with him in the Shack where the daughter was killed. Mack goes to the Shack and spends the weekend with God, talking through his issues and growing in his knowledge of who God is and God’s plan for this world.

The thing that strikes you as most jarring as you read the book is the depiction of God. All three of him. There’s God the Father, who is presented as an African-American woman named Papa. There’s Jesus, a Middle Eastern man in work clothes and a tendency to be a bit clumsy. And there’s Sarayu, an Asian female who drifts in and out of view, semi transparent, who is the Holy Spirit. For me, this sent off alarm bells. God is a God who reveals himself. Through his Word, the Bible, he has made himself known. The Father we cannot see. He relates to us as a Father – the language of the Bible always uses masculine terms to describe him. By making him a being with physical appearance, the appearance of a woman none the less, is idolatry. We are not to make graven images of God. I believe that this is what Young has done in his depiction of the Trinity. Sure, show us a human, Middle Eastern Jesus. That’s how Jesus was revealed to us. But to depict The Father and The Holy Spirit in this way is contrary to the revelation of God.

How The Shack treats God’s revelation to us is my major concern with this work, over and above his depiction of the Trinity. God has revealed himself through his prophets, through his son and through his Word, the Bible. Yet the Bible and any organised form of Christianity that seeks to make the Bible known are constantly undermined. Instead, we are effectively told to take what ever we thought we knew about God and faith and replace it with Young’s teaching. This is a teaching about relationships over doctrine. A teaching about finding God in your own way and your own time. A teaching about looking for the word of God any where BUT the Word of God. We live in a culture where what is new and interesting is more valued than what is old and trustworthy. That’s an attitude we need to repent of. We need to look at our Christian heritage with respect and honour – taking lessons from what they got right as well as what they got wrong. But most of all we need to recognise that while God may talk to us in all kinds of ways, if those “messages from God” are inconsistent with the Word he spoke in the Bible, then they are wrong and not from God. We are to treasure the Bible and constantly return to it.

Through out The Shack I felt at times like throwing my copy of the book against a wall. Words were being put into the mouth of God that were not consistent with the Bible. The God of The Shack exists the way he does because of the creation. He doesn’t know love except through us. That is wrong. This is a creation centric approach to God. This is mankind trying to make himself important by giving himself a starring role in the very nature of existence. This is man bringing God down and elevating himself so they meet halfway. God is God. God is sovereign. God is unchanging. God does not need us nor change just because we exist. Yet he loves us all the same. Mack is not only the central character of the book, but, symbolically, the centre of all creation. Wanting to be like God got us into this mess in the first place. Wanting to be the significant part in the plans of God is not much better.

God is a holy God. The Temple system of the Old Testament clearly demonstrates this. At the very centre of the Temple is the Holy of Holies. This is where God dwells and meets with his people. The Holy and the Unclean can never, ever meet. Only one person was ever allowed into the Holy of Holies. This was the High Priest. Once a year, he would undergo rituals and sacrifices to not only make himself clean, but holy enough to come before God. The other priests would tie a rope around him, because if the High Priest died while in that special room, then they could not go in after him, they needed to yank him out with the rope. Meeting with God was serious business. Encountering God forces people to their knees in fear and reverence. Yet Mack meets with God in the most casual of ways. He eats with him, jokes with him, swears in front of him, challenges his authority. Again, this is not the God of the Bible. There is no way Mack could come before God so casually and so defiantly. This warm, fuzzy God of The Shack is not the God of the Bible.

Yet this God is appealing. Who wouldn’t want to interact with a God that bakes cookies while she dances? The problem is when this false god becomes so appealing that people reject the Bible and the God within. The Shack doesn’t help us understand God, it replaces him with an inferior, created being. That’s idolatry plain and simple. Following God isn’t about us. It isn’t about finding a god that fits inside our little boxes of what we’d like him to be. It isn’t about finding our own way to him and communicating via “relationships”. God has made himself known to us. He has told us who he is and what he has done and what he is going to do. He has told us how to relate to him and everything we need to know to be in a relationship with him. He has told us this through the Bible. Anything that says otherwise leads away from God and should be rebuked and avoided.

Some may say it is just a work of fiction. I don’t buy that line of argument. This book is an evangelistic tool. It not only sets itself above criticism, but encourages the reader to preach its message. In the forward, the author writes “Mack would like you to know that if you happen upon this story and hate it, he says, “Sorry… but it wasn’t primarily written for you.”” These words put me on the defensive. I was being told that if I disagreed with what was written, if I reacted badly against it, then “it wasn’t primarily written for you.” To me, that’s being told that if you don’t like it, go away. It’s saying to me that I’m not allowed to be critical of this work. Sorry, I don’t buy that.

Secondly, any work that spends two pages in the back of the book encouraging me to spread the word about The Shack is pretty suspect. We’re encouraged to get the word out there so that it may be turned into a movie. We are asked to buy multiple copies and give them away as gifts so they can get “a magnificent glimpse into the nature of God that is not often presented in our culture”. We are encouraged to blog about how The Shack has changed our lives (works of fiction don’t change lives. Gospels do). We are to go out of our way to spread the “good news” of The Shack. This is not a work of fiction. This is a new way of thinking. This is a false gospel.

There’s an audience for this book. Over one million copies in print. A Christian bookstore I know of ordered in copies of this book because they were getting customer after customer asking after it. They didn’t order in any more copies after they read it and found out what it was really about. People are going to buy this book, read this book, and be fooled into thinking that this accurately represents the Bible. It does not.

I found this review by Tim Challies really helpful. The site in general has stacks of book reviews that (from the few I’ve read) seem well worth reading.

For more on the depiction of the Trinity in The Shack, Mark Driscoll has a few things to say.

6 responses to “Book Review: The Shack”