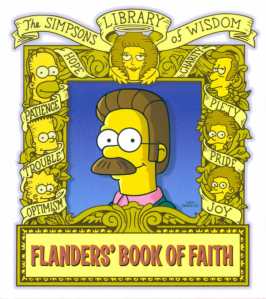 Over the last few years, Harper Collins have been realising a series of small books called The Simpsons Library of Wisdom. Previous titles include: The Bart Book, The Book of Moe and Comic Book Guy’s Book of Pop Culture. I own Comic Book Guy and it’s a hoot. Made up of mostly one page gags, they make nice little books to sit on your coffee table for people to flick through. Last week, while browsing the shelves at Moore Books, I found something I had to have. I found Flanders’ Book of Faith.

Ned Flanders is both the neighbour to the Simpsons and an extreme caricatureof the white, middle-class, conservative American Christian. While at times cringe worthy, Flanders is always full of the love of Christ. It wouldn’t hurt if we were all a little more like Ned. (Though Ned was ruined slightly for me after his sexual rendezvous with movie star Sara Sloane)

There’s Flanders answering Bible questions from the Springfield kids. WWND? (What Would Ned Do?) A religious tract with all kinds of whack-out extra-Biblical quotes. A map of Praiseland, the theme park inspired by Ned’s late wife, Maude. Homer Simpson’s Dream Church. And more!

It’s good for a laugh. I’ll be using bits of it here and there on this site to start up discussions etc. If you’re looking for a copy for yourself, it’s available in most bookshops, though Moore Books had it at a significantly cheaper price than I’d seen elsewhere.