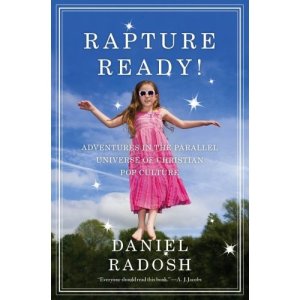 When I saw this book on the shelf at Moore Books, I only had to read the subtitle to know I wanted to read this book – “Adventures in the Parallel Universe of Christian Pop Culture.”

A book all about Christian pop culture? That is so my kind of book. Daniel Radosh deals with all kinds interesting topics ranging from Christian theme parks to Christian wrestling organisations.

Daniel Radosh describes himself as a “humanist Jew.” He is not a Christian and is completely foreign to the world of Christian culture. After becoming aware of this culture that seems so foreign and alien to him, he decides to explore this phenomenon from an outsiders perspective.

What he finds both surprises and challenges him. What he expected to find was a world full of ultra-conservative right wing fundamentalists. Instead, what he found was a very diverse range of people, with a wide spectrum of spiritual and political beliefs. For Radosh, this was challenging. He’d been characterising Christians as a whole based on a vocal and powerful minority. All he saw was people he thought were hypocritical hate-mongers. And while he found some people who confirmed this position, he found many more that did not.

The second way I was challenged was by reading how Radosh perceived his treatment by Christians. In some cases he was too scared to reveal his was a Jew – he feared he would be lynched. Other times he felt like some Christians only continued talking to him after finding out he was a Jew so that they could convert him. He felt like he was a task that was needing to be done, instead of a flesh and blood person. The Christians that Radosh really seemed to connect with, the ones that really had him at ease and made a connection with him, were the ones that wanted to get to know him as a person. The ones who wanted to know what he believed without dismissing or belittling those beliefs. I got the sense that if any one had a chance to convict Radosh of the truths of the gospel, it would be those who took the time to build a relationship with him and engage in discussion rather than preaching. It leaves me with the question – Do we spend a disproportionate ammount of time on bringing people to “Evangelistic Nights” and not enough time building relationships? Are people more likely to turn to Christ if they are shown God’s love or if they are told about it?

When meeting up with Bibleman actor R.T. Schlipp, R.T. prayed with Radosh. Radosh writes “And then he prayed that my book would help Christians see some hard truths about themselves, even if it hurt.” I don’t think Radosh had this intention when he wrote this book. However, I definately think it did help me.

Here’s a list of the topics that Radosh covers in Rapture Ready!

I really gained a great deal from this book. I think it will be influencing how I view Christian pop culture in the future. Get your hands on a copy and let me know what you think. I got my copy at Moore Books.

I also found a good review of this book at http://www.christandpopculture.com/literature/rapture-ready-adventures-in-the-parallel-universe-of-christian-pop-culture/